In Spring, we presented two powerful stories about standing out from the crowd – and getting lost in it. Thomas Adès' Asyla travels from the desolation of a swarm of people seeking refuge to the ecstasy and excitement of the 1990s techno scene. Richard

Strauss' Ein Heldenleben is full of heroic swagger and brooding emotion, as the composer goes to war with his critics and surveys his own life. Together they were the perfect match for an adrenaline-fuelled, totally teenage orchestra hungry for adventure.

It’s amazing. You must realise, UK, the diamond you have with this orchestra! You don’t need to go far to find such an exceptional adventure...

OUR JOURNEY THROUGH THE REPERTOIRE

Film clips of the Spring 2014 residency

See photographs from the Spring 2014 residency in Durham

Thomas Adès was already the enfant terrible of classical music when he launched his first work for massed orchestra, Asyla, on the world in 1997. Taking inspiration from club culture, and featuring a huge percussion section with tuned cowbells, a water-gong (this genuinely is a gong suspended in a tank of water), knives and forks, it confirmed him as a composer of exuberant and kaleidoscopic talent.

“the enfant terrible of classical music”

The title is typical of Adès love for wordplay: it’s the plural of asylum and has myriad meanings. In the first movement, it conveys a search for refuge, with Adès depicting “thousands of people swarming through the plains”, through frantic scurrying among the strings and horns, and a panicked trumpet shrieks at unseen danger. The second recalls an ancient tradition of taking refuge in cathedrals – then the third abruptly

takes us to the heart of another asylum, the dancefloor of a London club. Watch out for the relentlessly repetitive techno riffs: Adès became so physically stressed when transcribing them by hand, he checked himself into hospital, fearing a heart attack. No wonder relief floods the fourth movement: here, says Adès, it’s “as if a window is thrown open”, to redemption and release.

People always claim teenagers are self-centred: well, they’ve got some distance to go before they reach the giddy heights of egoism traditionally believed to be at the heart of Strauss’s Ein Heldenleben – A Hero’s Life. In looking for the perfect hero to celebrate in music, that would surpass all other portrayals of heroism, Strauss discarded fictional types like Don Juan and Don Quixote, bypassed real men such as Napoleon, and finally settled on... himself.

Critics at its premiere were repulsed by the symphony’s seemingly autobiographical references, slamming it 'a revolting picture of a revolting man'. But Ein Heldenleben is more complex than was initially appreciated. It begins with a testosterone-fuelled surge of daring leaps for horn and cellos, but that early confidence is shattered in the second section, entitled The Hero’s Adversaries. The critics who scorned Strauss’ work are given different woodwind identities: the flute is 'very sharp and biting', while the cor anglais 'moans mercilessly'. Help is at hand with the arrival of The Hero’s Companion – Strauss’ wife. Cue an eccentric, flirtatious violin solo and a passionate love scene. All too soon, the voices of the enemies return and offstage trumpets signal a call to arms: a ferocious struggle that ends with the entire horn section playing in triumphant unison. This leads the way to a kind of 'greatest hits' compilation, with Strauss throwing quotes from his own favourite works into the mix. And it ends with The Hero’s Retreat From the World and Transcendence: adventure is replaced with the anguish of old age, the fateful tolling of the timpani and the peaceful resignation of a serene cor anglais. 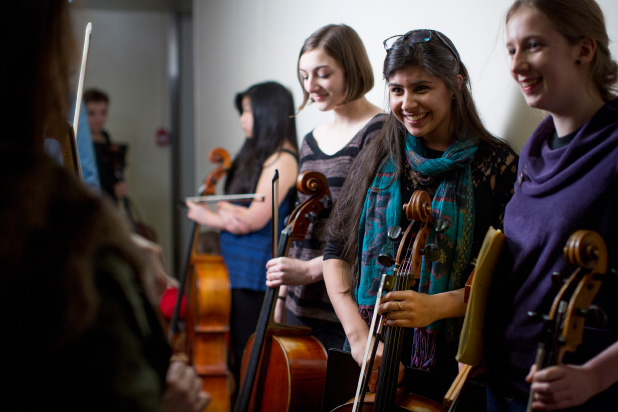 What happens during a typical reheasal day?

Find out where NYO is performing next

Find out how NYO is more than just an orchestra