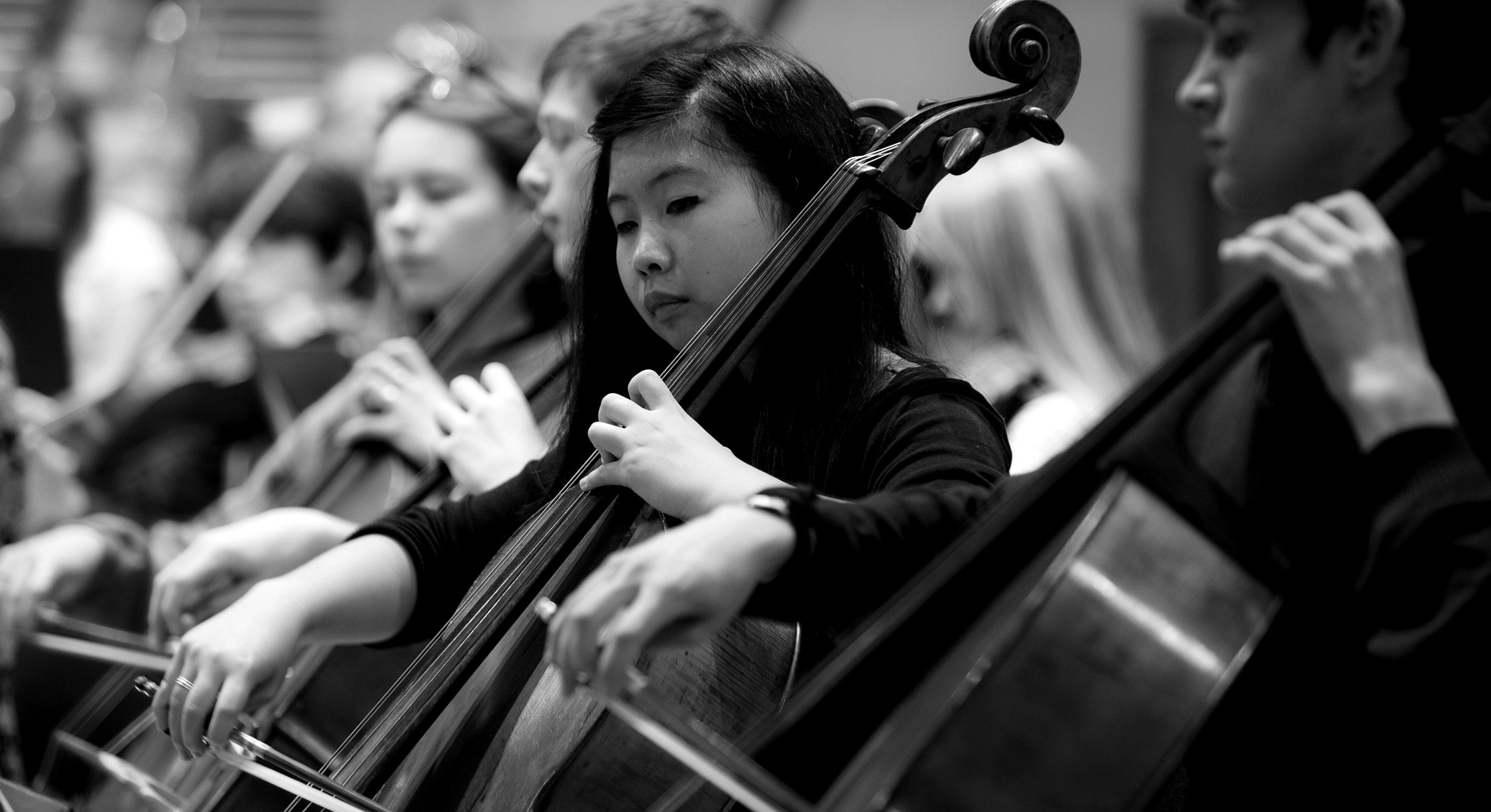 Hi! I’m Jenny and I’ve been a flautist in NYO for two years. As soon as I heard about the project with the Orchestre Symphonique Kimbanguiste (OSK), I knew I had to get involved. The OSK is a Congolese orchestra based in Kinshasa, Democratic Republic of the Congo. It was established in 1994 by conductor Armand Diangienda and soon caught the attention of the media, with a documentary on them released in 2010. Many of the players are completely self-taught which is where my job as a NYO player came in.

Since I started the flute aged 7, I have had regular lessons in which I learned many of the technical aspects of playing that I now take for granted. The OSK players have never had this opportunity. Therefore, the aim of them coming to the UK was to meet with professional musicians and learn as much as possible about the technical aspects of playing their instruments to benefit them individually and as an orchestra.  On top of this they would perform a selection of pieces including movements from Berlioz’s Symphonie Fantastique and the last movement of Beethoven’s Ninth Symphony to audiences in Manchester (alongside the Hallé Orchestra), then London at the Royal Festival Hall (which is where I joined them), and finish at Bristol and Cardiff.

One of the more unusual aspects of the project is that they spoke very little English, and despite my best attempts at GCSE, I and many of the other NYO musicians spoke very little French. Not to be perturbed however, I spent the journey up to London reading a French dictionary and trying unsuccessfully to translate what the French tourists opposite me were saying. Needless to say by the time I arrived in London, I had realised what a challenge this project was going to be and was quite nervous about meeting the players.

Our first activity was Come and Play which took place in the foyer of the Southbank Centre. There we met the OSK players as well as musicians from around London. We then all rehearsed, and eventually performed, a couple of sections from Beethoven’s Ninth Symphony, under OSK’s conductor Armand. In the flutes there were two OSK players, Nathalie and Samuel, who I managed to introduce myself to quickly before we started playing. It was clear from the start just how well they knew their parts, and I soon wished I had seen the music earlier (in my defence I had played a different part when NYO performed it at the Proms). Even though the whole orchestra had never played together before, the Beethoven already sounded pretty good and I was soon looking forward to the sectionals later that afternoon.

In sectionals, we rehearsed the pieces and tried a number of different technical exercises. The most interesting ones were the breathing exercises. Many of them I do regularly as part of my practice however it was soon clear that none of the OSK players had done anything like them before. Despite struggling at first, the OSK players were all really eager to learn and by the end of the session we were sounding so much better as a result.

The next day we started with another sectional however this time we were lead by Nicholas Korth, one of the French horn players in the BBC Symphony Orchestra. In this session, I learned more about the individual players, in particular Samuel who sat next to me. Despite having played the flute for twenty years when OSK began, his first lesson had only been ten years ago when a teacher came for four days to Kinshasa. He had never even had a lesson on the piccolo and only had access to a very old military style one. When the orchestra first started, the only instruments they could afford were very old and in disrepair, or made by the players themselves. It made me realize that some of us in the UK are very lucky to be able to go to a nice shop and pick our favourite instrument – something we easily take for granted.

That afternoon was the concert in the Royal Festival Hall. As soon as I walked on stage I was amazed at the number of people in the audience, and especially the diversity: young, old, black and white, they were all there clapping us on. It was so great to see and I felt really privileged to be playing with OSK. As an orchestra, they show how the common perception that classical music is only for the highly privileged minority can be completely wrong. Here are a group of people from one of the poorest countries in the world who despite a lack of resources have formed an orchestra, performing pieces that a professional orchestra would find challenging. Their passion for music was evident throughout the concert and it came as no surprise that at the end of the concert there was a standing ovation.

Two days later we were in Bristol preparing for our concert in Colston Hall that evening. Despite the lack of sleep it was great to be working with Nathalie and Samuel again (I even managed a few more sentences in French!). The concert in Bristol was just as thrilling and my grandparents were even in the audience. Speaking to them afterwards they said just how amazed they were at the orchestra and the quality of playing.

At the beginning I mentioned how the project was about the OSK players learning from us, however in all honesty I think I learned more from them! They’re so passionate about music and they play with such excitement, something that I think performers in the UK can sometimes lack because we take music for granted. As an orchestra, they have such a strong feeling of community and through the orchestra I’m sure a great many friendships have been formed. From the project, I was so glad that I could share my playing with Nathalie and Samuel. In turn, they reminded me of what drew me to music in the first place and why I love it so much. So thank you OSK for an amazing 4 days!